Buddleja crispa is a deciduous shrub which bears terminal lilac flowers in late summer contrasting with the felted silver leaves. There are many forms in cultivation so hardier than others. Specimens can be seen at Royal Botanic Gardens, Kew, Stone Cottage, Kidderminster and Ventnor Botanic Garden.

I have seen specimens 200cm (6ft) or so but at Longstock the plant struggles to make 40cm (18″) although it flowers well in early September and then dies down to the ground in winter. It is root hardy.

Named and described by English botantist George Bentham in 1832, seed was sent back to England from Afghanistan by the Scottish botanist Dr James Edward Tierney Aitchison in 1879.

Native to Gansu, Sichuan, Xizang and Yunnan Provinces of China plus Afghanistan, Bhutan, N India, Nepal and Pakistan, B. crispa grows in dry river bottoms, on slopes with boulders, on exposed cliffs and in thickets at elevations of 1400-4300m. 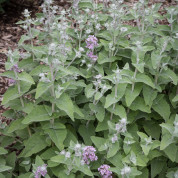 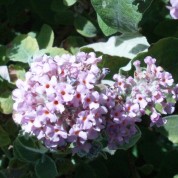 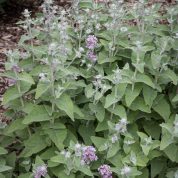