2016 will the first year we have had  Flutterby Petite® Snow White in the Collection. Notes below from the USA and UK

It makes a small shrub with a rounded, spreading habit, growing to a maximum of 0.75 × 0.75 m, with loose compound terminal and axillary panicles about 10.5 cm long by 3.5 cm wide, comprising around 60 scentless white flowers. The flowers emerge in spring and persist until the first frosts of the fall in  California. The opposite, narrowly elliptical leaves are about 6 cm long by 1.6 cm wide, pubescent above and below..

This little plant will dazzle you with its abundance of white flower-spikes, which appear over a prolonged period from midsummer. It is a new compact form of butterfly bush, which will never get too big – or self-seed like its over-vigorous cousin. Well-behaved, low-maintenance and long-flowering….what more could you wish for?

This year 2016 we will be growing in a patio pot, so suggest you see before you buy.

Our customers have voted and brought another USA raised cultivar, the tried and tested B. davidii ‘Monite’ (selling name Nanho White raised in 1997).

Admittedly it is the first year we have grown B. Flutterby Petite® Snow White at Longstock Nursery but in both a large patio pot and in the nursery gardens the growth and flowering has been poor.

The Flutterby series of Buddleja were developed by Peter Podaras in the USA at Cornell University, New York and are marketed by Ball Ornamentals. This series said to  have sterility or low fertility. A hybrid created from (Buddleja davidii X Buddleja alternifolia) X Buddleja davidii. 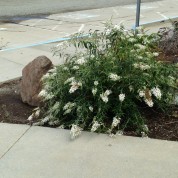 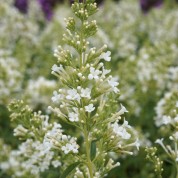