In our display B. ‘Les Kneale’ stands out not for its bright flowers but for the flower colour which are white to a faint pink blush. The erect flowers are complemented by lime green foliage.

In some soils the flowers may only have a hint of lilac.

Planting in association with B. ‘Black Knight’ or. B. ‘Sugar Plum’ will show both to their best advange.

Buddleja davidii ‘Les Kneale’ is a cultivar cloned from a plant discovered on the Isle of Man by the Les Kneale who worked for the Department of Agriculture. 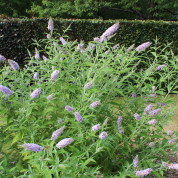 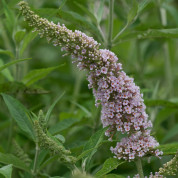 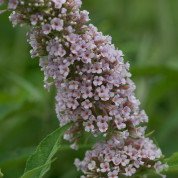 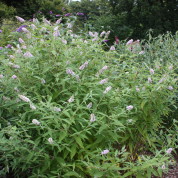