Producing clusters of sweetly scented violet – blue flowers in summer, Buddleja ‘Lochinch’ has arching stems and silver foliage and makes an attractive addition to a border. If old flowers are removed once past their best a second flush of flowers may be produced.

Buddleja ‘Lochinch’ is an old hybrid cultivar raised from a chance seedling found in the garden of the Earl of Stair at Lochinch Castle, Wigtownshire, Scotland, circa 1940; the shrub’s parents believed to be Buddleja davidii and Buddleja fallowiana.  B. ‘Lochinch’ was accorded the Royal Horticultural Society Award of Garden Merit in 1993,this was reaffirmed in 2010. 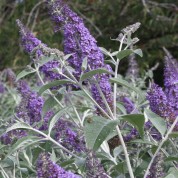