Buddleja megalocephala is an introduction from very high altitudes in Guatemala where it grows up to 5m tall at 3350m alt. Long narrow foliage has particularly white hairy undersides and the terminal heads of yellow turning deep burnt orange flowers are produced in ball shaped clusters, much in the same way as B. globosa. (We are still waiting to see the flowers).

Named and described by the American taxonomist Captain John Donnell Smith in 1897.

B. megalocephala is endemic to Guatemala where it grows in the Central Highlands, the Sierra de los Cuchumatanes and on Mt. Tacana on the Mexican border at altitudes of 2700-4000m. 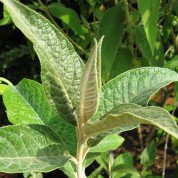 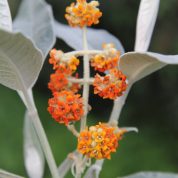