B. Sugar Plum  is a fairly new cultivar with long tapering clusters of pinkish red flowers with a yellow throat.  These look amazing when in full bloom, and will attract a wide range of butterflies to the garden.

As close as any Buddleja has got to being true red, B. Sugar Plum has a more compact habit than some of its red-flowered rivals. Flowers are produces in racemes up to 30cm (12”) long.

Buddleja ‘Lonplum’ (selling name is B. Sugar Plum) is a hybrid cultivar raised in 2005 by Peter Moore, Propagator at the Longstock Park Nursery in Hampshire, England. Agents Trade & Retail Stockist

SUGAR PLUM is a hybrid bred by Peter Moore at Longstock Park Nursery in 2005 .  A cross between B. ‘Summer Beauty’ and B. ‘Royal Red’. First shown at the Woking Nursery Exhibition in 2009 and introduced to commerce in 2010 having come 8th overall in the public popularity poll of 97 cultivars held as part of RHS Buddleja trials at Wisley from 2008 to 2010. One of the new plants shown at Plantarium in Boskoop, Holland 26-29 August 2015. 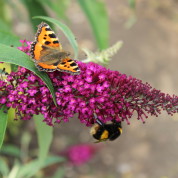 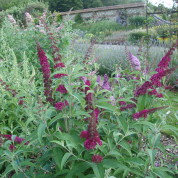 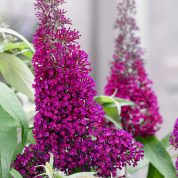 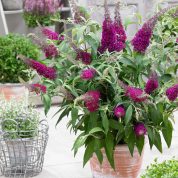 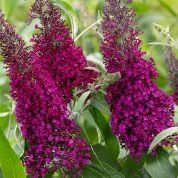 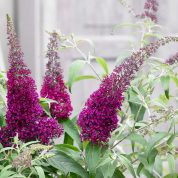