Buddleja crotonoides bears large grey green leaves covered with soft hairs. Flowers are borne from late winter in spiked clusters. Not winter hardy, this plant is best grown in a pot and brought into a glasshouse or conservatory to protect against frosts. It has now been decided that the subspecies amplexicaulis is the same as the species.

Named and described by the American botanist Asa Gray in 1861, B. crotonoides is unknown in cultivation.

The species occurs naturally from California in the USA through Mexico into Guatemala, Belize, Honduras, Costa Rica and Nicaragua. A small number of plants in Colombia and Venezula, growing in rocky disturbed sites in pine-oak forests at altitudes of 300-2700m but mainly between 1500-2000m.

California through Mexico into Guatemala, Belize, Honduras, Costa Rica and Nicaragua. A small number of plants in Colombia and Venezula. 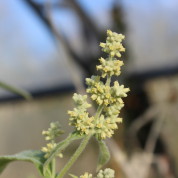