Buddleja indica is best grown as a houseplant in the UK as it requires high temperatures. The green glossy leaves are smooth and evergreen but flowers are very unlikely in the UK.

Described and named in 1785 by the French naturalist Jean-Baptiste Pierre Antioine de Monet de Lamarck, B. indica is rare in cultivation.

Commonly called the Indoor Oak the species naturally occurs on the Mascarene Islands, Comoro and Madagascar where its shoots climb or trail to produce a 4m high shrub. from the coast to elevations of 2000m in open places or scrubby bush.

Madagascar, Comoro and the Mascarene Islands 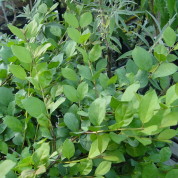